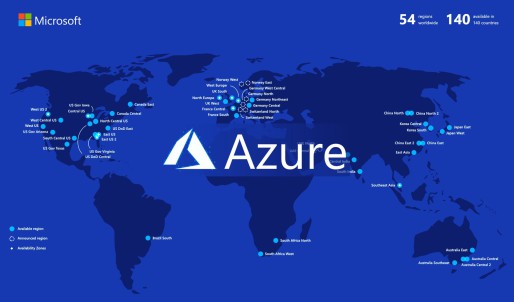 Microsoft Azure /ˈæʒər/ is a cloud computing platform and infrastructure, created by Microsoft, for building, deploying and managing applications and services through a global network of Microsoft-managed and Microsoft partner hosted datacenters. It provides both PaaS and IaaS services and supports many different programming languages, tools and frameworks, including both Microsoft-specific and third-party software and systems. Azure was announced in October 2008 and released on 1 February 2010 as Windows Azure, before being renamed to Microsoft Azure on 25 March 2014.[1]

High density hosting of websites allows developers to build sites using ASP.NET, PHP, Node.js, or Python and can be deployed using FTP, Git, Mercurial or Team Foundation Server. This feature was announced in preview form in June 2012 at the Meet Microsoft Azure event.[2] Customers can create websites in PHP, ASP.NET, Node.js, or Python, or select from several open source applications from a gallery to deploy. This comprises one aspect of the platform as a service (PaaS) offerings for the Microsoft Azure Platform. It was renamed to Web Apps in April 2015. http://azure.microsoft.com/en-us/services/app-service/web/

These applications can be deployed to a Web App to implement background processing. That can be invoked on a schedule, on demand or can run continuously. The Blob, Table and Queue services can be used to communicate between Web Apps and Web Jobs and to provide state.

Cloud Services is a platform as a service (PaaS) environment and can be used to create scalable applications and services. It supports multi-tier architectures and automated deployments. Previously named "Hosted Services", the Cloud Services for Microsoft Azure comprise one aspect of the PaaS offerings from the Microsoft Azure Platform. The Cloud Services are containers of hosted applications. These applications can be Internet-facing public web applications (such as web sites and e-commerce solutions) named "Web Roles", or they can be private processing engines for other work, such as processing orders or analyzing data named "Worker Roles".

Developers can write code for Cloud Services in a variety of different programming languages. There are specific software development kits (SDKs) provided by Microsoft for Python, Java, Node.js and .NET.[3] Other languages may have support through Open Source projects. Microsoft published the source code for their client libraries on GitHub.[4]

Delivers Windows apps from Azure to run on a variety of devices – Windows, Mac OS X, iOS or Android. Remote applications are run on Windows Server in the Azure cloud, where they’re easier to scale and update. Application users install Remote Desktop clients on their Internet-connected laptop, tablet or phone, and can access applications as if they were running locally.[6]

Storage Services provides REST and SDK APIs for storing and accessing data on the cloud.

This service lets programs store structured text in partitioned collections of entities that are accessed by partition key and primary key.

This service lets programs store unstructured text and binary data as blobs that can be accessed by a path.

This service lets programs store and access data on the cloud using the SMB protocol.

DocumentDB is a NoSQL database service that implements a subset of the [SQL] SELECT statement on [JSON] documents.

A managed implementation of Redis

A PaaS offering that can be used for encoding, content protection, streaming, and/or analytics.

Azure DNS is a DNS domain hosting service. It provides domain name resolution services using the cloud infrastructure of Microsoft Azure. The Azure DNS services are integrated with other Azure services in terms of APIs, billing, credentials. The Azure DNS service is built up on the highly scalable cloud infrastructure provided by Microsoft Azure. The deployment is Anycast based and the service has a high global footprint to provide faster network resolution. Azure DNS is currently open for public preview.[9]

This offering lets you create private connections between Azure datacenters and infrastructure that’s on your premises or in a colocation environment. ExpressRoute connections don't go over the public Internet (sometimes called "dark fiber") and offer more reliability, faster speeds (it's like a leased line), lower latencies (one hop to Azure), and may offer higher security than typical Internet connections. In some cases, using ExpressRoute connections to transfer data between on-premises systems and Azure can also yield significant cost benefits.

Scaling and reliability are controlled by the Microsoft Azure Fabric Controller so the services and environment do not crash if one of the servers crashes within the Microsoft data center and provides the management of the user's web application like memory resources and load balancing.

Azure provides an API built on REST, HTTP, and XML that allows a developer to interact with the services provided by Microsoft Azure. Microsoft also provides a client-side managed class library which encapsulates the functions of interacting with the services. It also integrates with Microsoft Visual Studio, Git, and Eclipse.

Some data center regions have servers grouped inside containers, each containing 1800–2500 servers.[14][15] As of 2014, the servers running in China (North) and China (East) are available for customers signed up through 21Vianet only, the local Microsoft Azure operator.[16] Microsoft Azure officially launched its Oceania location on 27 October 2014,[17] the Australia Regions is currently limited to customers with billing addresses in Australia and New Zealand.[18] Pricing, terms and conditions may differ between regions.

Construction of the $500 million facility required one million man-hours of work with a peak workforce of around 2,100 workers.[28] The facility, which began operating on 1 July 2009, currently covers 303,000 square feet (2.815 hectares), with 5.4 megawatts of critical power available. Over time, the data center is expandable to a total of 22.2 megawatts of critical power to support future growth.

Microsoft has stated that, per the USA Patriot Act, the US government can have access to the data even if the hosted company is not American and the data resides outside the USA.[29] However, Microsoft Azure is compliant with the E.U. Data Protection Directive (95/46/EC)[contradiction]. To manage privacy and security related concerns, Microsoft has created a Microsoft Azure Trust Center,[30] and Microsoft Azure has several of its services compliant with several compliance programs including ISO 27001:2005 and HIPAA. A full and current listing can be found on the Microsoft Azure Trust Center Compliance page.[31] Of special note, Microsoft Azure has been granted JAB Provisional Authority to Operate (P-ATO) from the U.S. government in accordance with guidelines spelled out under the Federal Risk and Authorization Management Program (FedRAMP), a U.S. government program that provides a standardized approach to security assessment, authorization, and continuous monitoring for cloud services used by the federal government.[32]